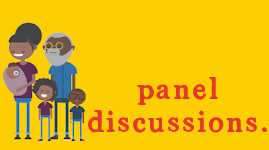 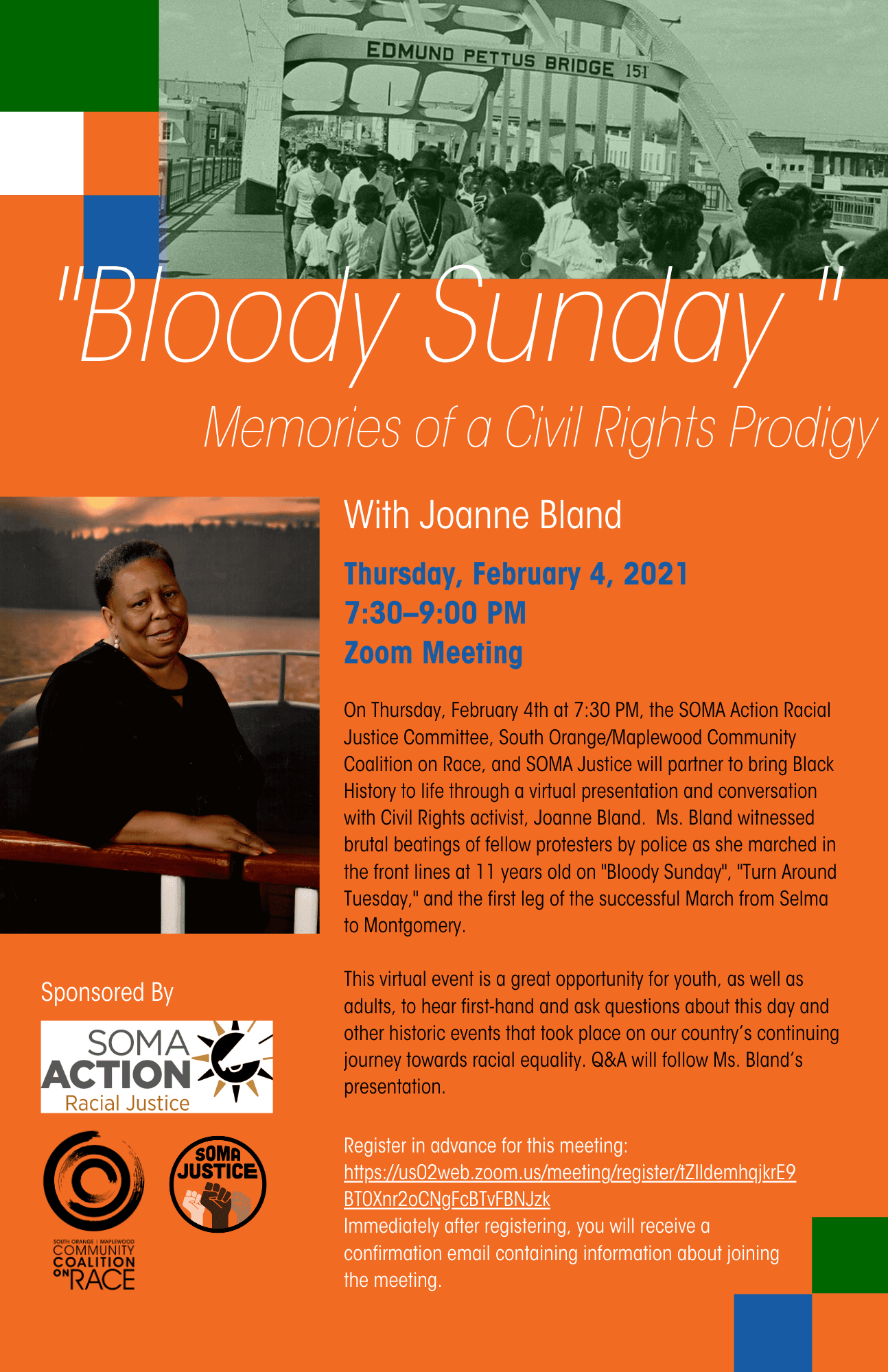 On Thursday, February 4th at 7:30 PM, the SOMA Action Racial Justice Committee, South Orange/Maplewood Community Coalition on Race, and SOMA Justice will partner to bring Black History to life through a virtual presentation and conversation with Civil Rights activist, Joanne Bland. Ms. Bland witnessed brutal beatings of fellow protesters by police as she marched in the front lines at 11 years old on "Bloody Sunday", "Turn Around Tuesday," and the first leg of the successful March from Selma to Montgomery.

This virtual event is a great opportunity for youth, as well as adults, to hear first-hand and ask questions about this day and other historic events that took place on our country’s continuing journey towards racial equality. Q&A will follow Ms. Bland’s presentation.

Register in advance for this virtual meeting:

Immediately after registering, you will receive a confirmation email containing information about joining the meeting. 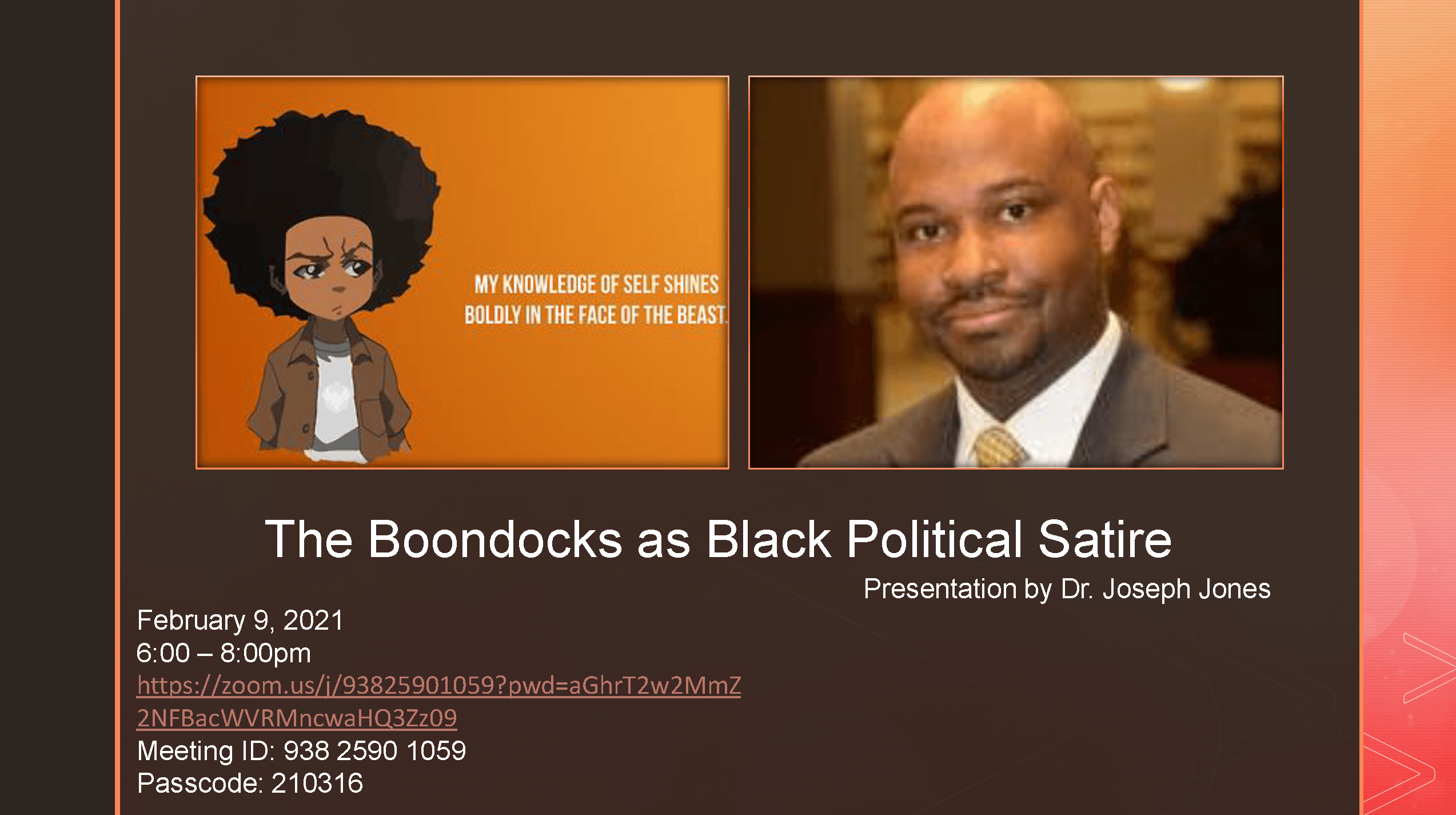 *Sponsored by Seton Hall University - Open to the Public*

A presentation unpacking the creative way “The Boondocks” confronted issues confronted by the Black community.

Dr. Joseph Jones will discuss the value of the animated show, “The Boondocks,” as political satire. The Boondocks creator, Aaron McGruder, used the animated series to tackle protracted problems with and external to the Black community. This program will be broadcast on Zoom via this link! 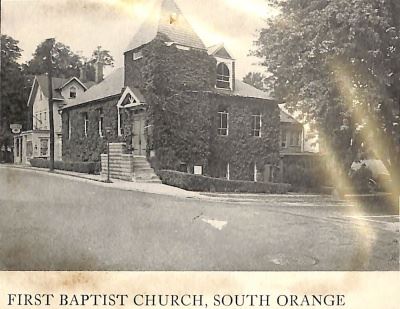 The History of the Black Community in South Orange

The Township of South Orange Village was officially established in 1869 but boasted a rich history prior to being incorporated as its own city.  There were several key families that helped to put South Orange on the map, and the town included a train line, Montrose Park, several houses of worship as well as a Catholic University, Seton Hall University, which was established in 1856.

Based on historical documents, the residents of South Orange have always been diverse and that is one of the many reasons why people flock to our community. What has not been covered in-depth is the established Black community that in the early 1900s was approximately 19% of the community and today makes up 26.6% of the South Orange Community with an additional 8% of Black Undergraduate Students at Seton Hall University.

In Naoma Welk’s Images of America South Orange, the story of George Timson, who was a South Orange resident, is the only named Black resident that is featured.  With such an established history of Black people in our community and a town that boasts a large Black population, we want to know and understand the history of Black people in our community then and now.

Join us “virtually” as we discuss the overall black experience of residents and students in South Orange from the establishment of the black community, the rise of the black church, the impact of integration into University, and a focus on civics within South Orange.  Our panelists will bring real-life experiences to the discussion and will allow the community to have a greater understanding of the impact that the Black community has had within the town. 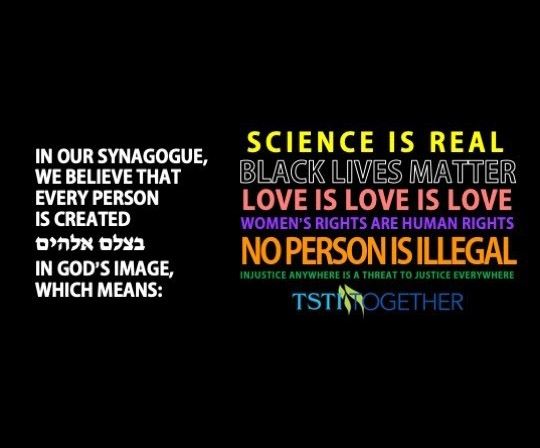 JEWS AND BLACKS IN THE CIVIL RIGHTS ERA AND NOW
Sponsored by Temple Sharey Tefilo-Israel, South Orange
For TSTI Members and Prospective Members Only
Zoom Presentation

Explore the reality of the relationship between the Jewish and Black communities during the Civil Rights era. The Jewish narrative of that era is not completely seen the same by everyone or grounded in the reality of what was truly happening. We were participants in the Civil Rights movement but it is not our story. Explore some historical events that impacted Jews in America including the Leo Frank and Temple bombing in Atlanta to the sociological and generational issues that shaped Jewish activism and participation, or lack of, on both sides of the movement. Also, how does all of this impact what is happening in the streets of America today?

Speaker: Billy Planer, Founder, and  Director of Etgar 36 Tour Program. He developed Etgar 36 after 20 years of leading synagogue youth programs and educating young people. He has led numerous trips around America and abroad. 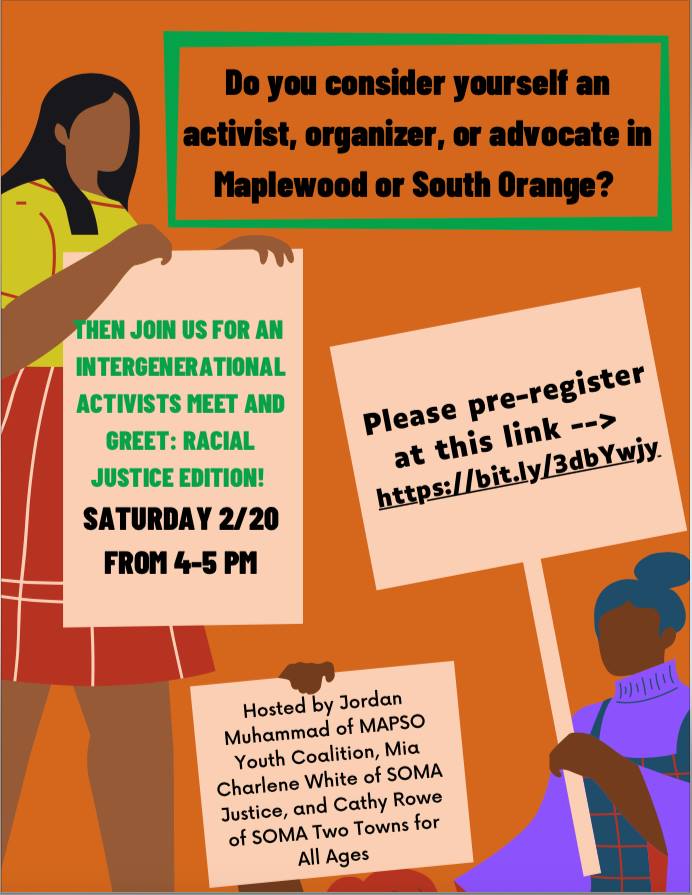 Join us for a conversation between activists of all ages on the topic of racial justice. This event is open for anyone and everyone who considers or has considered themselves an activist, and, please note, everyone who attends is expected to participate!

Jordan Muhammad from MAPSO Youth Coalition, Mia White from SOMA Justice, and Cathy Rowe from SOMA Two Towns for All Ages will host the event and engage participates in consideration about their experience in and thoughts about the fight for racial justice in America by utilizing break out rooms and facilitating discussions.

Join our Sport & Social Change panel discussion as our panelists share their philosophy and approach to sport and change. 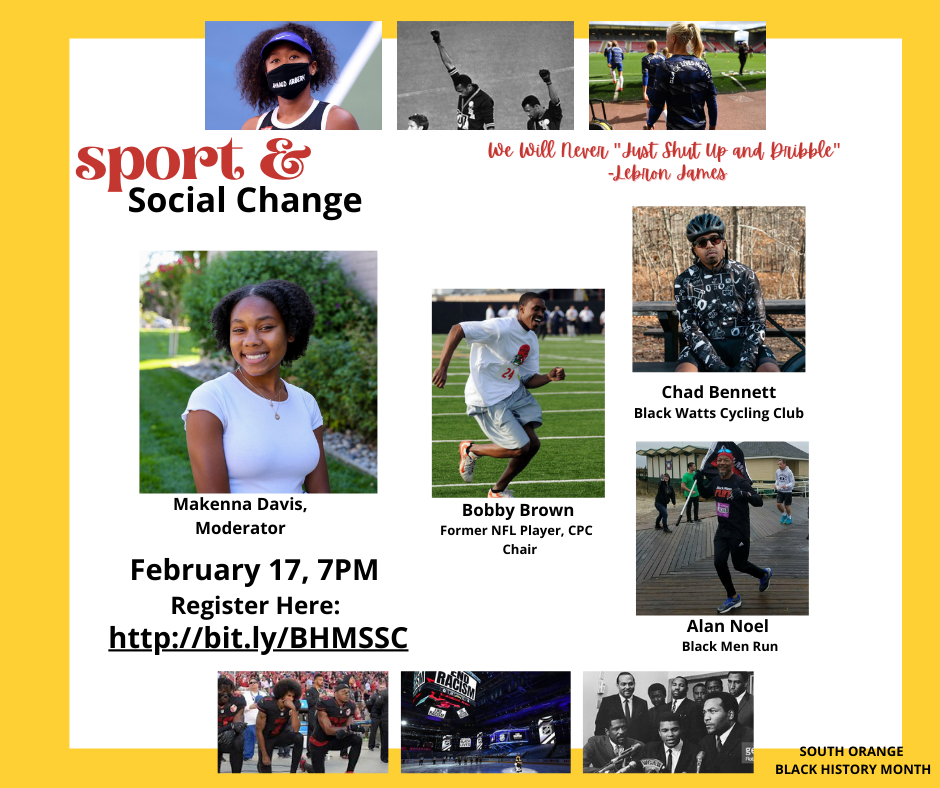 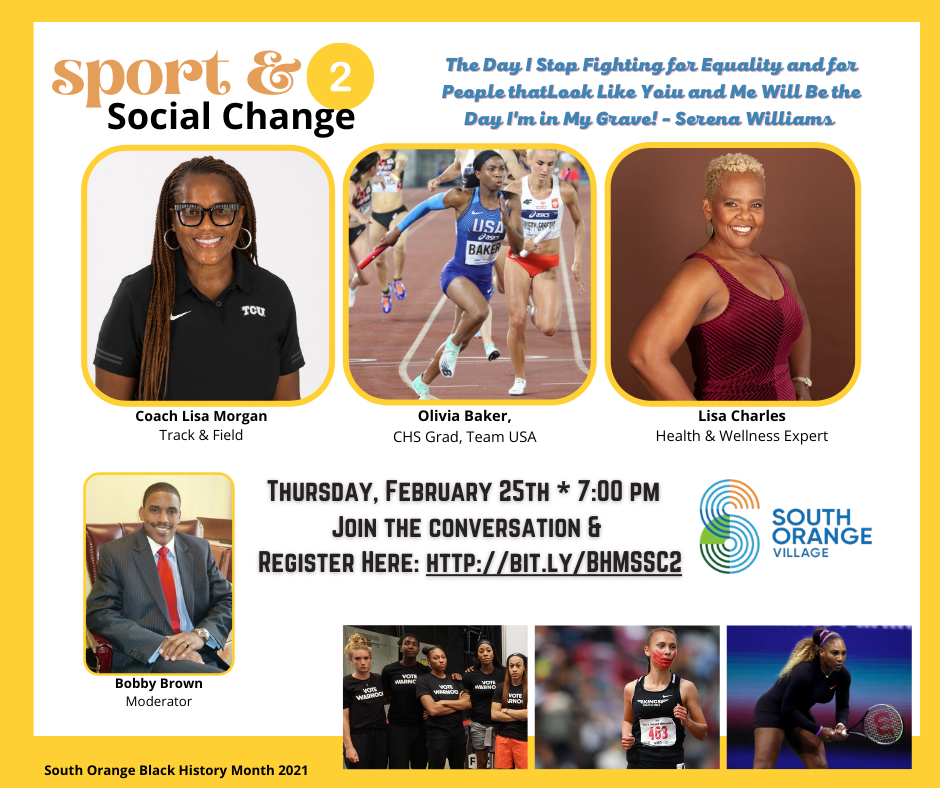 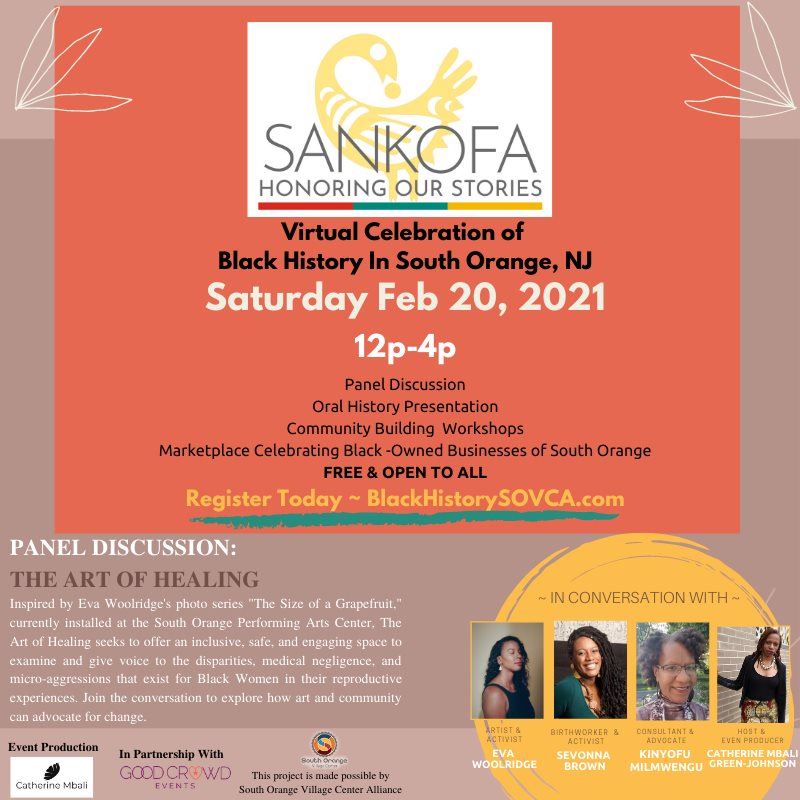 Panel Discussion
Inspired by Eva Woolridge's photo series "The Size of a Grapefruit," currently installed at the South Orange Performing Arts Center, The Art of Healing seeks to offer an inclusive, safe, and engaging space to examine and give voice to the disparities, medical negligence, and micro-aggressions that exist for Black Women in their reproductive experiences that are often left unspoken and unaddressed.

These experiences include but are not limited to, infertility, miscarriage, premature birth, abortion, and postpartum depression/psychosis. The conversation examines how they affect the Black community mentally, spiritually, and emotionally.

The one-day panel discussion is a forum for new viewpoints, language, and practices offering individuals a newly empowered relatedness to their experiences, dispelling the stigmas associated with reproductive health. The Art of Healing promotes the free exchange of stories and ideas through a panel of the most brilliant academics, healers, and practitioners in the reproductive, psychological, and holistic health fields. The event will culminate with a performance in tribute to the Black Women throughout history who have experienced medical trauma in an effort to inspire the healing of our community. 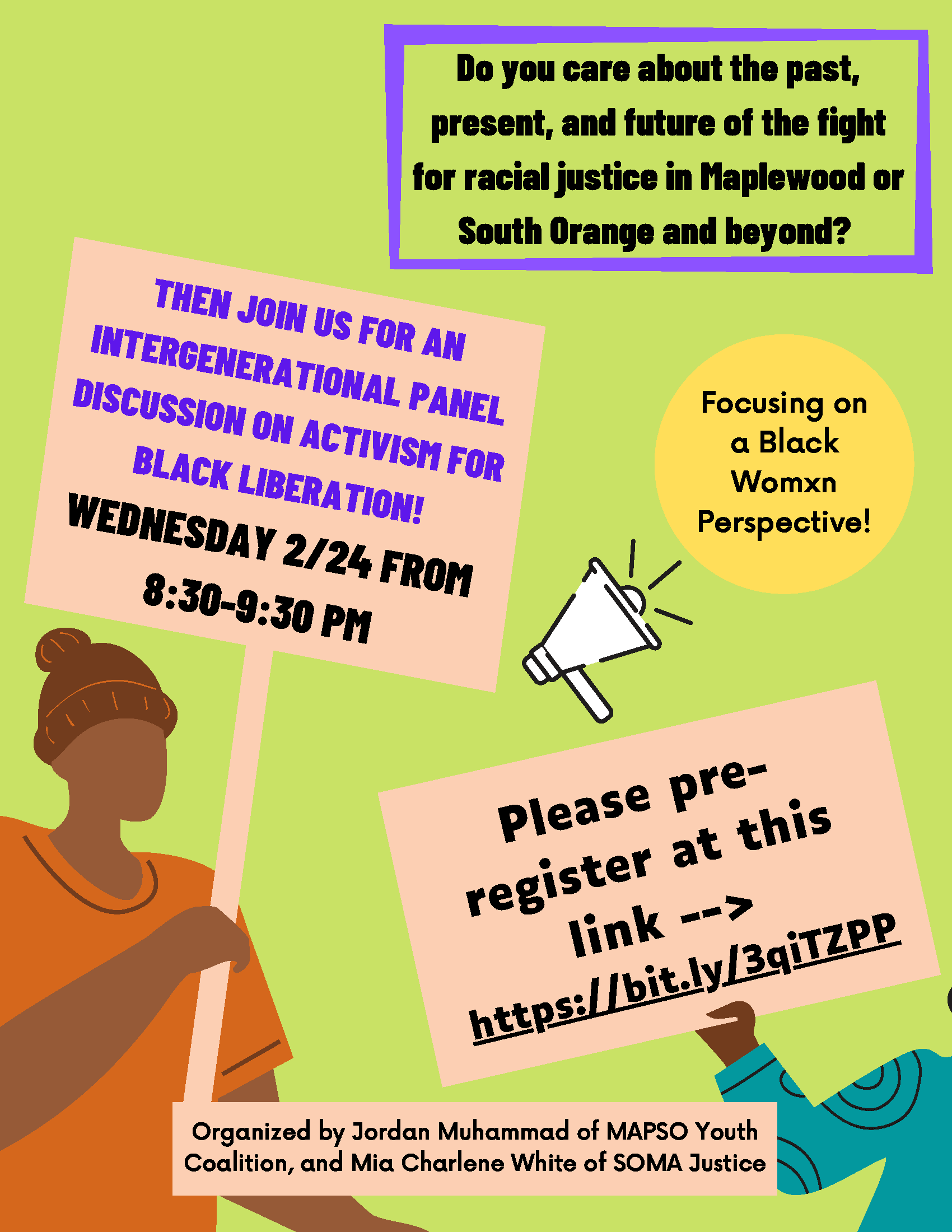 An intimate conversation about the fight for black liberation through a black womxn* lens.  Hear Dr. Khadijah White of SOMA Justice, and Jordan Muhammad of MAPSO Youth Coalition, moderated by Dr. Mia Charlene White from SOMA Justice in conversation with archival footage of founding Black Panther member Erica Huggins and other black womxn activists of our American past as they discuss the past present and future of Activism for Black Liberation. This event will end with a live Q&A.

*A woman (used, especially in intersectional feminism, as an alternative spelling to avoid the suggestion of sexism perceived in the sequences m-a-n and m-e-n, and to be inclusive of trans and nonbinary women) 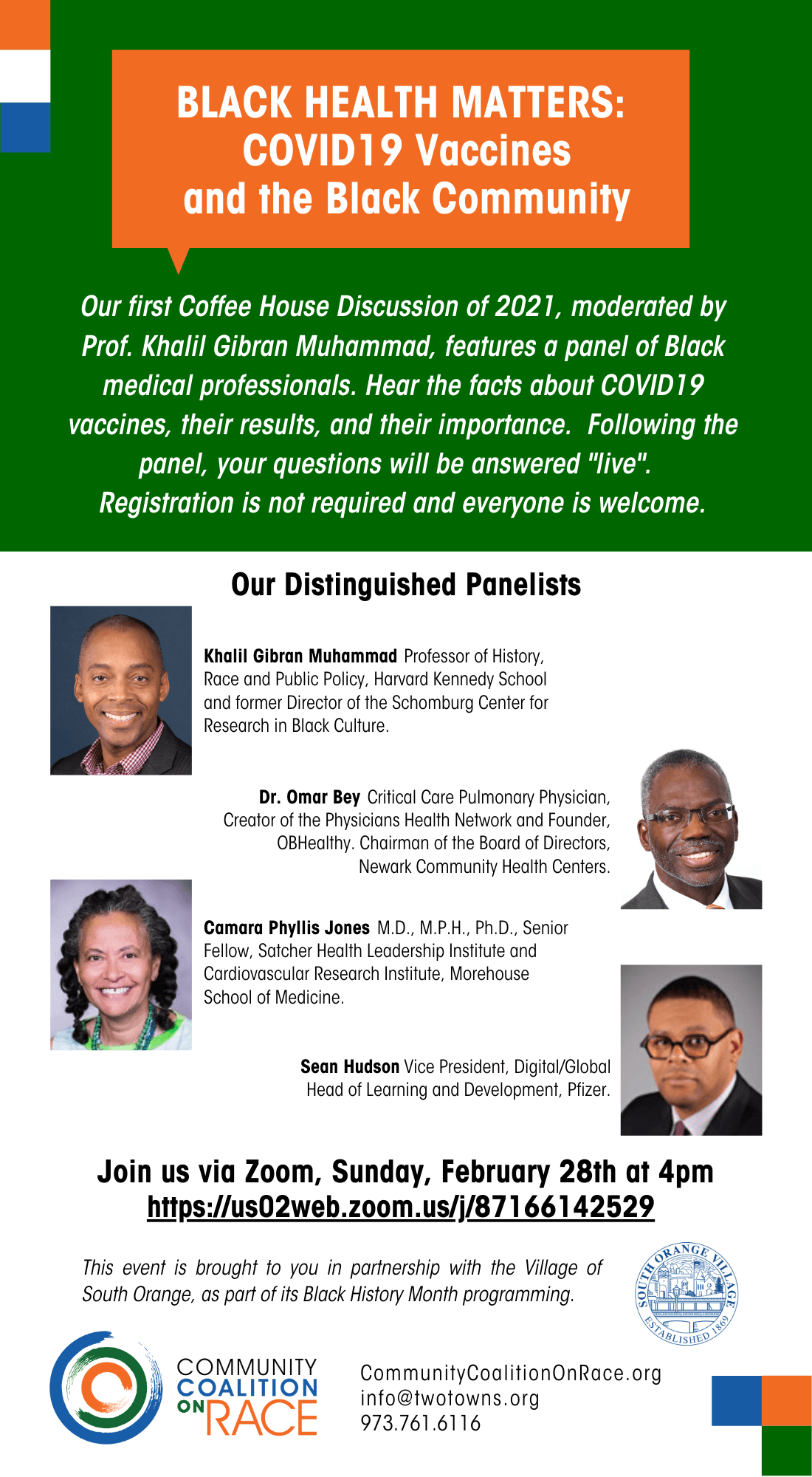 Sunday, February 28th at 4 PM |No Pre-Registration is Required

In partnership with the Community Coalition on Race, the Village of South Orange invites community members across the Two Towns to learn from community health experts, physicians, and those who have received vaccinations in order to build COVID vaccine confidence among vaccine-hesitant people in SOMA.

The event features a panel of Black medical professionals discussing COVID19 vaccines. The panel will be introduced by historian, author, and Professor of History, Race and Public Policy at Harvard University, Khalil Gibran Muhammad. The panel discussion will be followed by a live Q&A between panelists and participants. We hope you will join us for this informative event!

The Zoom link is below-no pre-registration is required: