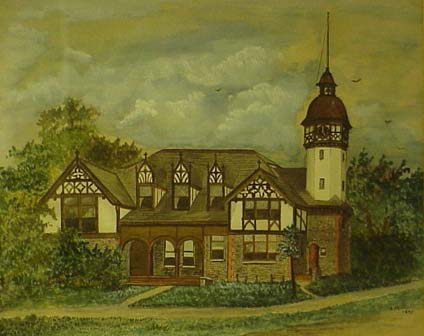 The history of our town dates back to May 21, 1666, when Connecticut settlers landed on the shores of the Passaic River. Guided by Captain Robert Treat and Lieutenant Samuel Swaine, the group purchased land, now known as Newark, from the Lenni Lenape Indians on July 11, 1666.

Those families wishing to farm moved westward into South Orange and surrounding areas. In 1678, the Lenapes sold the settlers a second parcel of land running from the East Branch of the Rahway River to the mountain top.

South Orange Avenue, an Indian trail, served as the main thoroughfare. But in 1705, road statutes required landowners to maintain the first primitive highways. These included Main Street and Valley and Ridgewood roads. Washington and his troops often traversed the latter during the American Revolution.

The mode of transportation graduated from horseback, to ox-cart, to stage coach. Then in 1836, the Morris and Essex Railroad developed a single track between the Village and Orange and operated a horse-drawn cart. A year later the line was extended and two cars were pulled by a wood-burning steam locomotive. The advent of the railroad established South Orange as a suburb of Newark and a summer resort. Just after the railroad was continued through to Hoboken in 1868, the Village began its rapid transformation from a rude settlement of farms and mills to a polished residential railroad suburb of New York and Newark.

Swamps were drained, roads were constructed and gas lines were laid in the 1890s. Sewers and running water were later added. Street lamps in the town's center burned sperm oil until 1860 when gas service became available. Electric power was brought into the Village about 1888, although most of the streets are still lit by gas lamps. The first telephone exchange was opened in Orange on December 6, 1879. In 1899, a Village central office was established.

The transition of South Orange from vast farm lands to a prestigious residential community is due in large part to the vision of one man, New York attorney John Gorham Vose. Taken with the rich mountain scenery, he purchased a home on Scotland Road in 1858. In 1862, he began to buy large plots of land to begin his conversion. As building got underway, Villagers took great interest in the development of each magnificent home. In just a few years, 175 acres between Scotland Road and Center Street were complete. Vose christened the area Montrose. Other successful businessmen, Turrell, Kingman, Connett, Mead, Speir, and Mayhew, also bought farms, carved out streets, and helped change the face of the community.

The Village Hall, built in 1894, housed the fire department until 1930 when it was moved to Sloan and First Streets. The police department then moved from its 1872 building just west of the railroad into the newly vacated space in Village Hall. In March, 1972, a separate police station and Municipal Court building on South Orange Avenue was completed.

The first U.S. Post Office was opened in 1841 in Freeman's Store at 71 South Orange Avenue but the Postmaster reported "receipts so dreadfully small" that business was suspended. In 1843, another office was opened to serve the thirty families nearby. In all, six different sites were used until 1937 when our present first class Post Office was opened on Vose Avenue in a new building of its own. Free mail delivery started in 1899.

Built about 1680, the Stone House is the oldest in the Village and is still standing on South Orange Avenue near Grove Road. The colonial house at 167 North Ridgewood Road was built by Henry Squier in 1774 and acquired by William Redmond when he bought the Squier farm in 1850. Later the house was leased to a dairyman named Flood who pastured his cows in what is now Meadowland Park. Flood's Hill in the park, used for winter coasting, was named for this family. William Redmond built the brownstone mansion for his home which is used today by the Orange Lawn Tennis Club. Another landmark, said to have been built around 1830 and standing until after 1881 when it was destroyed by fire, was The Mountain House, a fashionable water-cure supervised by two physicians, where spring water piped down the mountain to it, was thought beneficial. A large wooden structure with two wings, set in spacious grounds on Ridgewood Road, at the foot of the present Glenside Road, the hotel accommodated 150 guests. Mr. Lord of Lord & Taylor owned it in 1850 and leased it to G. Baird. The Eclipse Stage Line operated in 1830 between the hotel and Newark. Today the sole reminders of the resort are Mountain Station and Mountain House Road, both established to accommodate hordes of visitors who once flocked here.

South Orange was part of Newark until 1806, when what is now the Oranges and Maplewood were set off as "Orange Township." The name Orange came into use in the second half of the 18th century, and was officially adopted by a meeting of the inhabitants in 1780. The name South Orange first appeared in print in a newspaper ad in 1793 in "Wood's Gazette." It replaced such old names as Chestnut Hill and the Mountain Plantation.

Village government has changed dramatically from theocracy to democracy since the 1600's. In 1776, there were only a cluster of houses, a grist mill, a black-smith shop, a store or two and a tavern but South Orange inhabitants were united in defense of home and country. In 1872, civic indifference reached a peak when only 235 votes were cast in a presidential election. Population has steadily increased: 7,200 in 1920, 13,000 in 1928 and over 16,300 in 1995. The creation of the South Orange Township by an act of the New Jersey Legislature in 1861, led to the granting of the Village Charter in 1869, but not until 1872 was it given authorization to levy taxes and borrow money. In 1904, complete separation of Village and Township was effected by action of the State Legislature, after South Orange had agreed to remain in the school district. A copy of the 1869 Charter and its amendments, variances and supplements was printed in 1906. In November, 1977, South Orange voters passed a new Charter for South Orange and changed its name to The Township of South Orange Village.